Cutting the blank and preparing for the offset 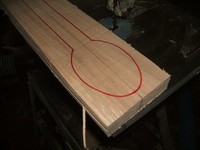 They are then cut out on the band saw. I do this one at a time but you could hot glue them together and cut them as a group if you so desired. 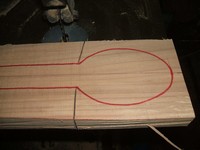 Remember to give clearance cuts for the bottom of the bowl and to leave a tenon (unmarked) for mounting at the tip of the bowl. 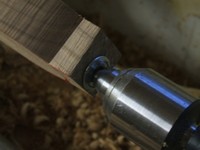 Mount the blank between centers. The tailstock center is offset from center about 1/4" so as to give an angle to the handle when the spoon is reasting. this makes it easier to pick up. 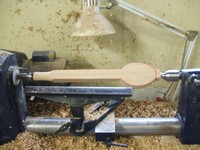 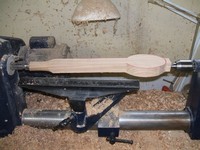 A tenon is turned to mount in the chuck. The entire spoon can be turned between centers and I often do so, but for the first few times a chuck gives more security. There is a lot of chatter as you get close to the bowl due to the offset. The tenon is necessary as it is now in line with the tail stock for the offset. 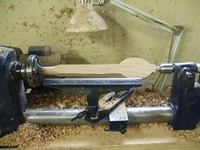 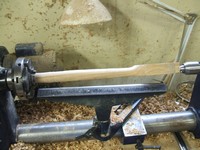 Rough turn the handle. There will likely be some chatter due to the offset. Do not worry about it now, the handle is refined later.